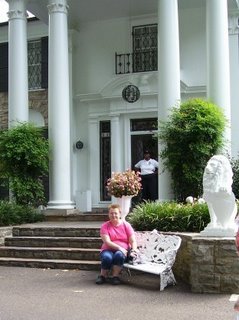 Growing up in a very small town in New Zealand in the 50's and taking on the era of rock 'n' roll and Elvis Presley, I would never have dreamed that I would one day sit on the seat in the front of the house that Elvis Presley called home.

Linda and I enjoyed Elvis so much in those early years (not to mention our mother) and collected records, books and went to see as many of his movies as we could.

Initially we thought that the tours for Graceland had been booked out for the day we were going to be in Memphis, Tennessee but we decided to turn up before the booking office opened that day. We were second in the queue and we able to go through the building as members of the first tour of the day.

It was very satisfying to move on in our travels knowing that we had achieved what was a milestone to us.
Posted by crazyquilter at 2:02 PM