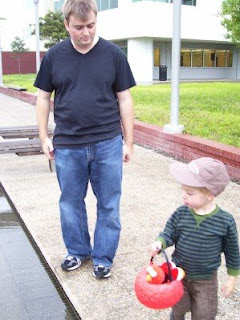 Train journey over and I made it home again in time to be an observer for Googleween - David's employers version of Halloween.

Not quite sure what I expected from all of this but I soon came to realise that Google have made this celebration into a family event.

In the States, commercially Halloween is the most successful celebration after that of Christmas and when you see the amount of time and effort that families go to in costume dress up either for themselves or their children you gain some understanding of the popularity of this event.

Google had set this event up in the outdoors but the day was the first in a number of wet days and with the State of California being very thirsty for wet weather you could not complain about that but in terms of Halloween it did put a bit of a dampener on events.

Musical entertainment, nibbles and pumpkin decoration all seemed to be events of the day. 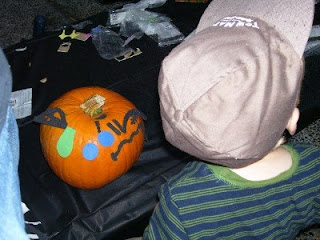 With a bit of help from Dad, Jackson was successful in creating a face for the pumpkin of his choice.

Lisa had bought Jackson a car costume to wear for Halloween but the tow car driver's cap was as far as he was prepared to go and he could easily have been a two truck driver in miniature dressed as he was. 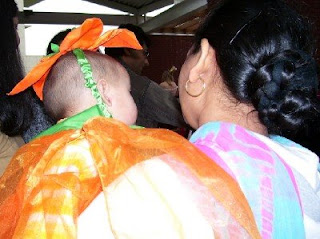 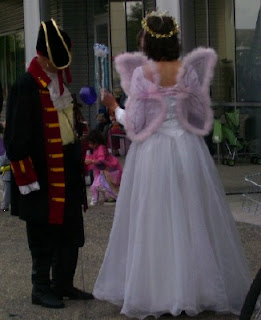 Young and old - a young baby dressed up as a flower and adults dressed in costume as well -just a small sampling of what was on show. Spider man was very popular amongst the young boys.

The rain meant our time at Google was shortened and so we moved on to Lisa's work.

Jackson took his Elmo themed treat basket and he scored very well as we moved around the different cubicles at Live Ops and was consistently polite with his 'thank you's' as his treat basket filled up.
Posted by crazyquilter at 5:17 PM