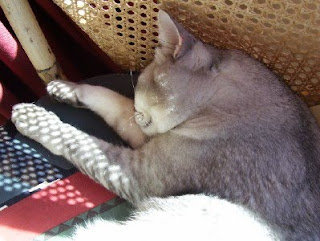 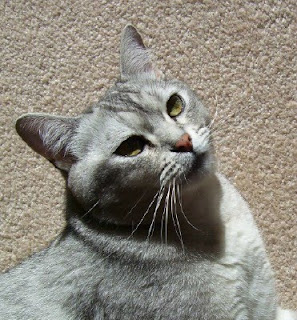 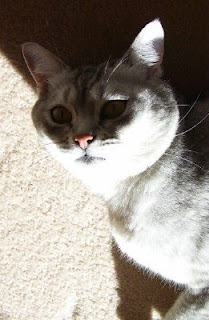 Today was Boris's last day with us and I thought I would try to capture a few pictures before departure.

As always, he was a bit camera shy, but I did manage to get a couple of shots with his eyes open even though the morning sun was against me.

A little later I noticed he was taking a nap on the cane chair that was one of his favourite spots and seemed a fitting last shot to take of him.

The buyer had sent a cage for him and I was successful in placing him in it so my sister and I could transport him to the airport for a 40 minute flight to his new home.

He was not happy about the car trip one little bit but imagine my surprise when I turned in the car to see that he had forced the cage door open and was making a bid for freedom.

Oddly enough Bella had done something similar before she left us, forcing a bar in the cage to manage an escape before being recaptured for departure.

We were able to pull over in the car and get Boris back in the cage and I held the cage with him in it while we returned home to reinforce the door before embarking for the airport once more.

This time we were successful and after a bit of paperwork he was on his way. Last reports he was tentatively surveying his new surroundings.

Have a long and happy life, Boris, we wish you well.
Posted by crazyquilter at 7:10 PM

Oh my! Two friends losing their fur babies. I am so sorry for your loss. He was a handsome fella. I wish you comfort in your memories of your precious Boris.
Gentle hugs,Pat

Sorry, I read your post too fast. I see he went to a new home, not "away". That is much better. He is a handsome fella.