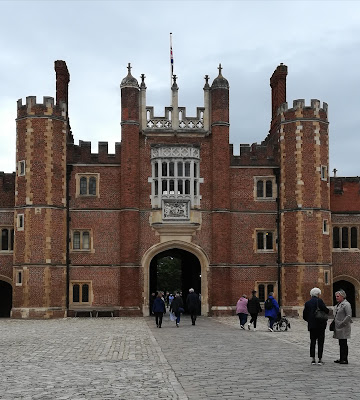 Last time we were in London we saw Hampton Court from the River Thames but did not go into the grounds or castle.

This time we decided to go to the castle itself so we caught an Uber from our hotel and went straight there.

The staff at Hampton Court have created a 45 minute 2 person act that incorporates conversations around Elizabethan times.

I did not take any photos but they were dressed in period costume and did make it an interesting presentation of the history of the times.

After watching The Spanish Princess at home we had hoped to see the rooms of the palace where the young Henry VIII lived but unfortunately these rooms were closed for renovations for a future event. 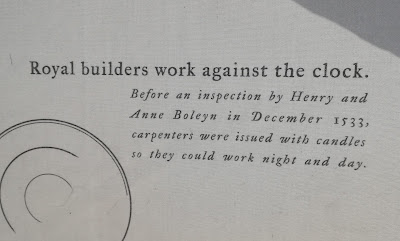 There were notes at various points that told of life around the palace in Tudor times.

Making palace staff work around the clock to meet deadlines put me in mind of some modern high tech companies that have high expectations of staff meeting deadlines for important events. 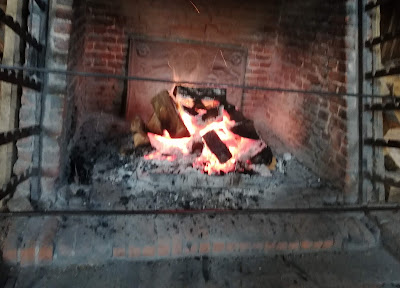 We wandered through the palace kitchens which were displayed as they would have been under the Tudors.

It was a cold day outside and the kitchen area of the palace was cold too.

This large open fire was a very welcoming warm spot for us.  Nice to linger for a little to soak up the warmth.

There were more spaces like this for open fires but they were not lit but all with fittings in place for lots of spit roasts to feed the large population of Hampton Court - the kitchen staff alone numbered 400+.

Opposite the palace we found The Mute Swan and had a very nice pub lunch there before saying goodbye to Hampton Court.


Posted by crazyquilter at 9:01 PM

My goodness, the kitchen staff of 400 souls would be stumbling over each other. I imagine the kitchen would be a very noisy place, too.

I loved our visit to Hampton Court, but then I am a real lover of anything Tudor related. The huge kitchens are amazing as are the beautiful tapestries. Royalty from other periods lived here later too, something I didn't know till we visited. I'm enjoying tagging along on your trip with you both.