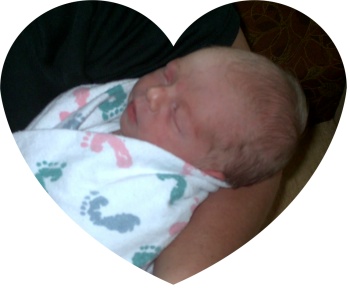 What we have been waiting for - the arrival of my first grandson - Jackson Tate.

In the words of his mother, Lisa:-

Jackson was delivered by Caesarian Section; his umbilical cord was wrapped around his head, impeding a natural birth. And we thought he was just stubborn when he wouldn't come out. :)

Posted by crazyquilter at 10:46 AM

Congratulations. What a beautiful and precious baby boy. I hope Mum is well and everyone is celebrating hard.

Congratulations Peggy..
Hope everyone is doing well, including grandma..

Welcome to the best club in the world, Peggy - the Grandmother's club! There's nothing like the feeling of becoming a grandmother - it's like falling in love all over again!!