Yesterday, Sunday here, we went to Santa Cruz for an outing. 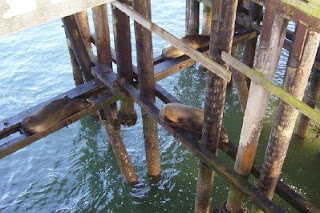 We had to go up over the hills to leave Silicon Valley and cooler temperature with an incoming sea breeze, was quite noticeable.

A walk through the local shops and a meal at a local Mexican restaurant were first up on the agenda and then we went for a walk along the pier.

Again their were more sea lions, not as prolific as at Fishermans Wharf but tucked away under the pier nevertheless.

Fenced off watching holes have been created in the pier to allow visitors to look down on the sea lions. If they did not have numbers they more than made up for it with their honking. One has to wonder what they are honking about as they seem to keep up conversation on an ongoing basis.

Looking back at the beach from the pier there is a huge building which looks late 19th century/early 20th century and then stretching out from that an enormous fair ground.

I did a little bit of research:-

and the boardwalk and fair were the West's answer to Coney Island in New York. The Santa Cruz fairground had been going for just over 100 years and from the screams coming from the rides when I took the photo it would seem to be just as popular as ever.

After spending time on the pier it was getting late so we did not take time out on the beach or at the fair but moved on. We were meeting a friend from Lisa's work for tea and we had a very nice meal at an Italian restaurant. The food in San Francisco is very good.
Posted by crazyquilter at 10:51 AM