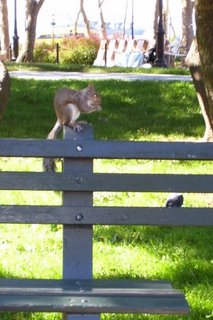 I have been to the Northern Hemisphere three times now and each time I have been fascinated with the squirrels I have seen.

I guess for anyone from the 'top half' of the world, they are so common, they probably don't even give them a second thought, but I love to watch these little creatures scurrying on ground level looking for food, sitting up on full alert or climbing/jumping around the local trees that are their habitat.

The squirrel in the image was at Battery Park, New York, where you catch the ferry to go to the Statue of Liberty.

There was a gentleman there who talked to tourists and told them how he had befriended some of the squirrels in the park and they readily accepted food from him.

We also stopped and watched squirrels in Central Park, New York, at my friend's place in Maryland and in St James Park, London on our way to watch the changing of the guard at Buckingham Palace.
Posted by crazyquilter at 1:22 PM

This is hilarious to me because of all the creative ways we've tried to get RID of the cute little squirrels that will eat all the food we buy for the wild birds we so love to watch, if we let them! I imagine we'd be just as fascinated with your kangaroos if we were down under.