Could this be the beginning of bigger things to come? 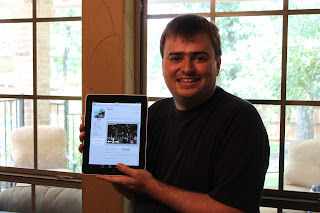 Three years ago David began creating a computer game with a playful hero called Frogatto. Over the past twelve months he has given it more serious attention resulting today in the release of the game by Apple as an application for iPhones.

Just another benefit of having my iPad with me. We are able to see an early release image of the game in Australia.
Posted by crazyquilter at 6:56 AM

Awesome. Congrats to him.
Smiles, Pat