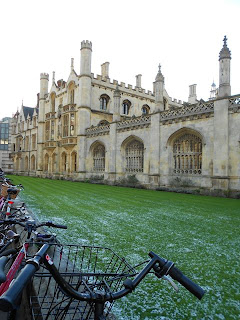 I received a text from Ricky early in the morning to ask if I knew it had been snowing in London at 7am.

Although I was up and about I was not aware of this.

A few minutes later he sent another text to say it was snowing in Cambridge.

We had been contemplating where we might go for the day and as soon as Marcele heard news of snow that was our destination for the day.

The temperatures had certainly plummeted but it was worth the effort to go.

We got an express train to Cambridge which took about 45 minutes from Kings Cross station.  It seemed hardly any time at all and we were beyond city limits but it was quite a while before we actually saw snow.  When we did it was just delightful.  Acres and acres of rolling countryside sprinkled with snow, heavier in some part than others, very, very pretty.

Cambridge itself did not seem to have much evidence of snow but that did not seem to matter.  A very helpful cab driver dropped us near Kings College so that we could have a good wander around the city streets.  I captured some remnants of snow in the foreground.  Aaron was very intrigued by the abundance of bikes everywhere.  Economical travel for students, no doubt.

Living down under and having watched shows like Inspector Morse, it all felt like familiar territory to come here - well worth it and the effects of the snow on the scenery was a real bonus.

Posted by crazyquilter at 4:37 PM

So pretty
So English!
Linda

I found your blog through a post somebody pinned to pinterest: I just wanted to let you know that you do lovely ribbon embroidery, and I've enjoyed reading about your jaunts in Washington state and England. I live in the northern San Francisco bay area and have also traveled north to the Washington area, so it was fun to see your adventures there. Hope you have a wonderful time for the rest of your trip!! Hugs, Helen in Healdsburg, Ca