More things that make me smile

We went the Broadway Markets in London today and it was great to see the way the marketplace has developed since I lived here in the seventies.
So many amazing food choices from England and abroad. Broadway Markets are small in comparison to many in London but it was just the right size for us.
After we had finished wandering it was time for a drink in a corner pub. 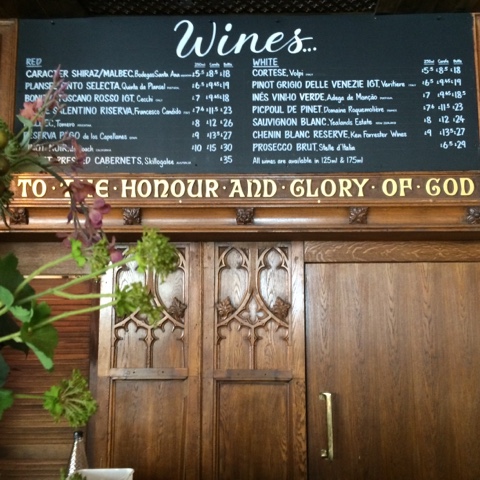 There, under the wine list an encouragement to honour God, and outside the pub a promotion that this was the House of Revelry - a contradiction in terms that made me smile.
In addition the other morning we went to have breakfast at a local cafe. Four adults and every breakfast platter had at least half a dozen fries as extra.
David had ordered bacon and egg with toast for his but when it came it had bacon eggs and fries only.
When David queried her, the waitress said, 'oh the fries are there for decorative purposes only' and very quickly produced some buttered toast.
Fries for decorative purposes only  has become a bit of a by word amongst us.
Posted by crazyquilter at 3:27 AM

Sounds like England has gone the way of America. Over there EVERYTHING comes with fries.

English pubs are the best - they have such atmosphere !

such a shame so many Churches have been converted into pubs etc, the Church I worship in is also an arts place so sometimes we have exhibitions and also concerts there etc. Not often you get something for nothing in a meal, sounds good free fries.