A visitor from Germany 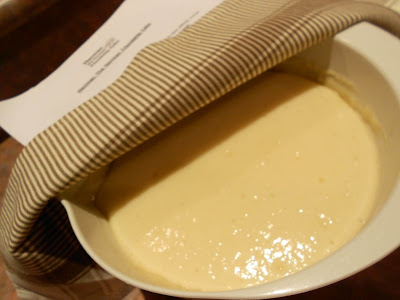 The other day our friend, Rochelle, popped around to see us and left us with a visitor from Germany, Herman the German Friendship Cake.

Well, not an actual cake but a sour dough mix that will eventually, we hope, become a cake.

My maternal grandfather was German so maybe I should have known about such things, but no.

The sour dough mix goes through a ten day process during which needs to be stirred and have food added.

We are up to day five and so far I have been able to keep up with instructions.

On day nine I am supposed to divide it into four segments and share three with friends and make a cake from the remainder on day ten.

I had a friendship cake years ago, it was so tasty, I only ever gave away two pieces. We ate one and I kept on feeding the last bit!
Enjoy.

How very interesting and fun! I will have to check this 'Herman' out further.

Ive heard of friendship cakes before but none of my friends bake so Ive never done one!

We did a friendship cake in church several years back - I hadn't thought about that in a long time.
hope it turns out well.
xo jan

These cakes are tasty. I haven't made one in years. I think I still have the recipe somewhere.