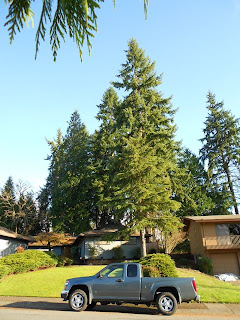 The bluest skies in all the world are in Seattle - at least that is what Perry Como used to tell us in the words of the song.

For the most part the skies have been overcast since I arrived in Seattle and that is understandable for this time of year in these parts.

Yesterday afternoon the skies cleared to reveal that yes, we do have lovely blue skies in Seattle.

It was so nice I took a walk in the local neighborhood and captured a bit of the sky and some of those trees which are so prolific.

The many trees seem to add a charm to the city of Seattle and they give the impression of living in a holiday setting rather than everyday working life.

I really have been enjoying the landscape here.

The weather forecast was for more clear skies today and Tuesday but so far this morning we have mist. Maybe it will change later.  David plans to take me on a ferry cruise tomorrow so fair weather would be nice.
Posted by crazyquilter at 5:06 AM

I've only been to Seattle in the summer, and it was gorgeous.

Have fun on the ferry cruise - may the sky be clear and blue.

I nice to see all that green and trees!

I absolutely love your blog.. Pleasant colors &
theme. Did you develop this web site yourself?

Please reply back as I'm attempting to create my own personal site and would like to find out where you got this from or exactly what the theme is called. Cheers!
Here is my homepage ; best way to make money without a job