Time to hug a snowman 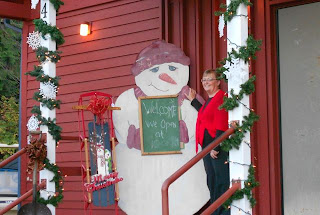 Before I left home I started to research about craft/quilt shows that I might be able to go to in the Seattle area.

I found out about a craft fair in Puyallup and on Thursday Lisa and I set out to spend the day there.  On the way we saw a much smaller craft fair being promoted and kept it in mind for another day.

Again the scenery along the way was pretty with lots of tree lined streets.

We got there just after opening time armed with coupons to give us half price entry.  We were met by a lady who was wanting to give away complimentary tickets so we did not have to pay for entry at all.

I had envisaged the fair to be much bigger than anything I had been to in Australia or New Zealand but that was not the case.  There were demonstrations of new craft ideas as well as workshops.  We watched a few of the demonstrations but did not stay for any of the workshops.

Some of the stalls were wall to wall people and we did not even get to take a look but overall we had a good look around and a few quilting goodies were purchased.

One of the items being demonstrated was the bloc-loc ruler.  They came in a whole range of sizes but I bought just the 6.5 inch square ruler which I think Linda and I and our Sweet Pea sewing group will get a lot of use from.

Surprisingly we were finished in about 3 hours so we headed back to Bellevue for lunch and to spend some time with David.

On our way home we realised we still had time to go to the smaller craft fair and this is where I got to 'hug' the snowman in the image.

This craft fair was totally different to the first one.  It was all handcrafted items by local artisans.  The theme was Christmas and there was a huge variety of goodies.  Christmas candies, cookies, jams, ornaments, knitted garments, jewelry and much, much more.

It was a lovely experience to be able to go to two totally different craft fairs in the one day.  I came home with goodies from both.

Many thanks to my daughter-in-law, Lisa, for taking the time out to make my day.
Posted by crazyquilter at 5:00 PM