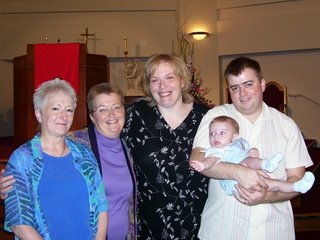 One of the very special things that happened for us while we were in the United States was for Linda and me to be able to be there to witness Jackson's baptism at the Christ United Methodist Church in Plano, Texas - www.cumc.com

The service was along traditional, conservative lines but that does not mean to say it was without pizzaz. We were entertained by the church jazz band and the fully robed choir sang magnificently.

The church was promoting a recent release of a CD by the church choir and their first song of the day was from the CD and it was 'Shout to the Lord', by Australian contemporary Christiansongwriter, Darlene Zshech - a long time favourite chorus of mine, given a great hymnal treatment by this group.

At the end of the service we were all asked to stand and sing 'God Bless America' in remembrance of September 11 - which was to be the next day. We felt privileged to be part of this and our only regret was that we probably did not know the words as well as we would have liked.

It was so lovely to be in Dallas to share with this significant milestone in grandson, Jackson's life, and lovely that an Australian song should have been sung and that we could stand with representatives of the American population as they paused to remember what is still an extremely significant event in their nation's history.

We are pleased to report that Jackson was happy throughout the whole service - but we wouldn't have expected anything less - would we?
Posted by crazyquilter at 1:57 PM