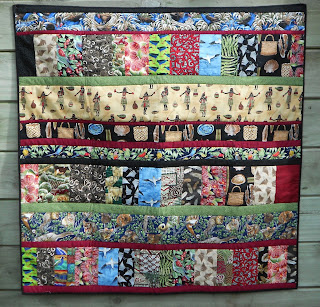 Today we had lasagne for our midday meal and it reminded me of the lasagne quilt I made.

Recently our local quilt group, Taupo Quiltmakers, had a sit and stitch evening and there was an opportunity to make a quick and easy quilt under sister Linda's watchful eye.

We have been given a lot of Kiwiana fabric scraps and so I decided to to use them for this project.

This is a quilt as you go project - sewing strips of fabric the width of the backing until you have covered the entire back.

Great use for my bits and pieces but I did have a bit of an oops as a couple of pieces of Australiana fabric found their way into the project and so I have called it 'Kiwiana Meets Australiana'.

It is a lovely lap size quilt and will be sent in thanks to the lady who gave us the scraps.  Did I say scraps?  From what we have been given I have now made 4 quilt tops, including this one, and have more than enough to make another one yet.

Does this idea have appeal for you?  Linda has written about lasagne quilts on her blog and you can see some different themes if you take a peek there.
Posted by crazyquilter at 3:19 PM 1 comment:

Made by Me for Me 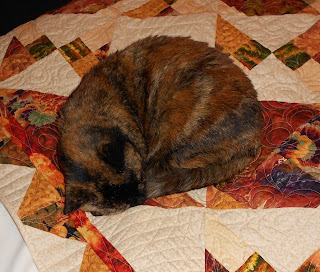 Well I did make it for me but CiCi thinks it is for her too.

Some quilts are a bit like wine, they need to be left to mature and this one was a while in the making.

Our Sweet Pea group give each other fat quarters for our respective birthdays in the colours of our choice.

For two birthdays I have received fat quarters in shades of autumn so I thought it was about time to do something with them.

I bought some cream fabric for contrast and Linda had found a pattern for a disappearing nine patch on the internet so I decided to give that a go.

Some of my colour choices were not too good and so the layout suggested in the pattern did not seem to work for me.  I decided to play around with the blocks and came up with a layout that revealed stars and so I decided to call the quilt, Surprisingly Starry:- 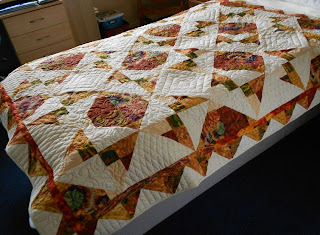 I asked Linda to quilt it in a way to emphasize the stars and so instead of doing an overall design she tried a number of different techniques and included squares within diamonds, curved cross hatching and piano keys and I couldn't be happier with the outcome. 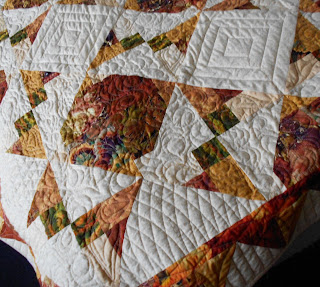 Now that I have had my fill of autumn fabrics (still more in my stash though), I am asking for soft greens and soft pinks so my next quilt creation from those colours will be quite different, I am sure.

You can read more about this quilt from Linda's perspective on her blog.
Posted by crazyquilter at 5:13 PM 2 comments: 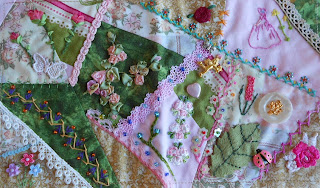 Last week the group of ladies from Tokoroa came for the revealing of the finished needle book blocks from our round robin.

The image on the left is my finished block.  I made the block but all of the embellishments were done by this lovely group of ladies.

I took photos of all of the finished blocks and have created a gallery page for your viewing.

One round robin finished and one to go.
Posted by crazyquilter at 5:54 PM 2 comments: