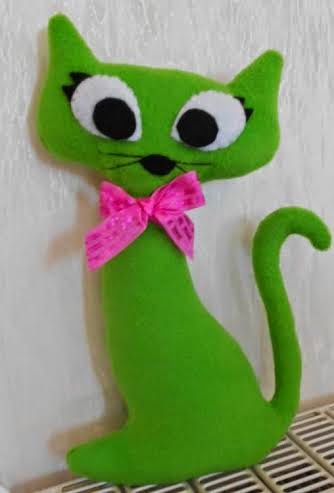 Our Sweet Pea numbers were greatly reduced this week but nevertheless we had an enjoyable meeting.  Always nice to share with other crafters.

Show and tell was limited but Debbie had a lovely soft cat to share.  Debbie loves lime green and it seems to find a way into most of her projects.  This cat is no exception.  Debbie is very creative and talented and made a great finish to this cat.

Just for the record 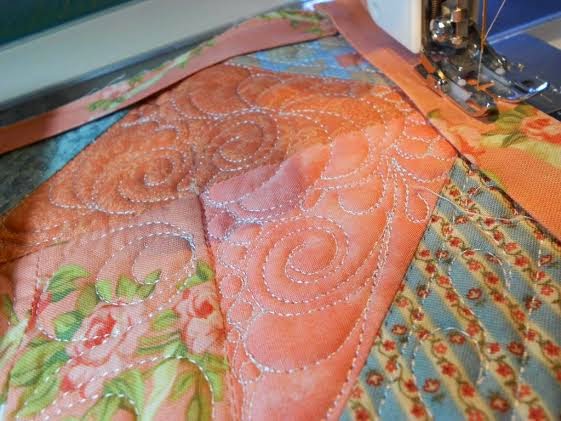 If you are familiar with my blog you will know that I often talk about finishing off a quilt with Magic Binding.

Linda has been working on a quilt top that I made last winter and today she got to binding stage.

Magic Binding was not going to work, it would take away from the points in the border so today I found myself making regular binding.

I enjoyed the exercise and Linda is happily doing the final hand stitching as I write. 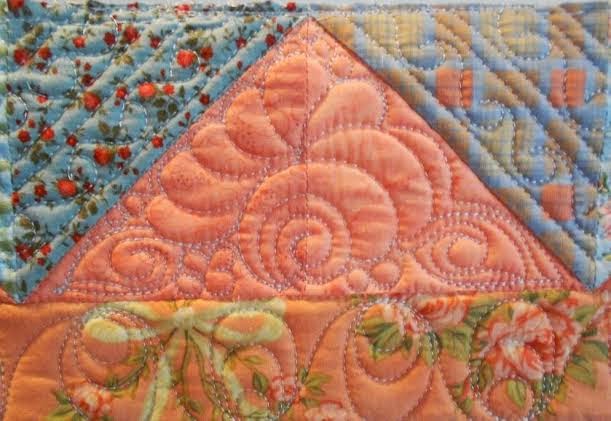 More photos of the finished quilt after it has been delivered to its new owner. 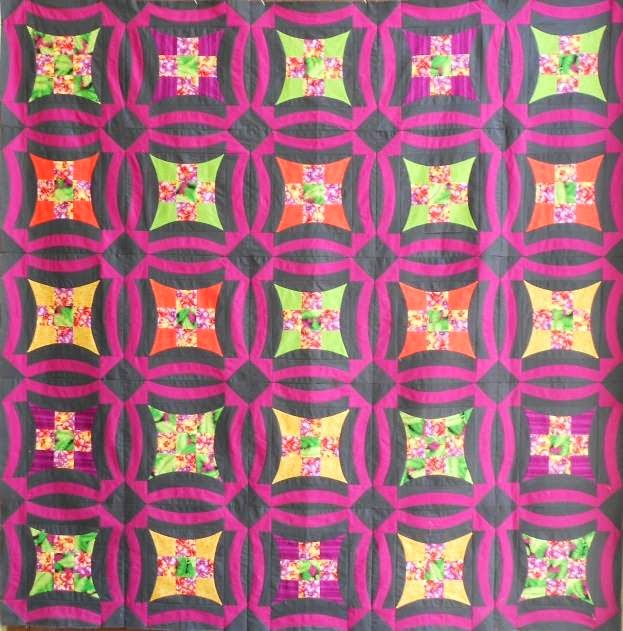 Last year I spent quite a lot of time completing this Urban Nine Patch quilt top.

I enjoyed the process of learning about curved piecing and always felt I would like to try the method again.

Linda has also made a quilt following the same curved piecing method.

You can see her completed Touch of Lime here.

Linda also had it in mind that she would like to make another quilt along these lines and had bought some yummy soft blue and cream fabrics to do so. 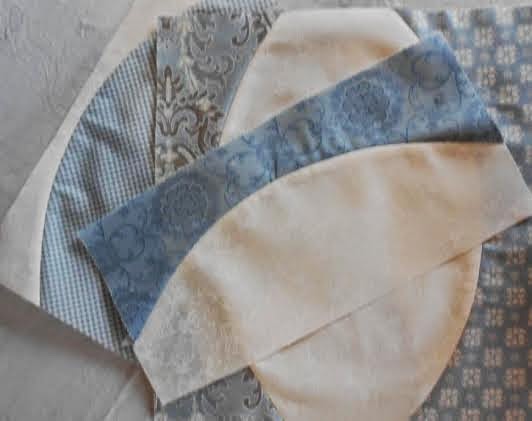 To move things along I offered to piece the blocks and so curved piecing is happening again.

The piecing is nowhere as labour intensive as the Urban Nine Patch and so the blocks have been made, trimming is underway and the design board process will be happening.

The soft, dreamy colours have been so nice to work with and already having learnt the technique it has been an enjoyable process. 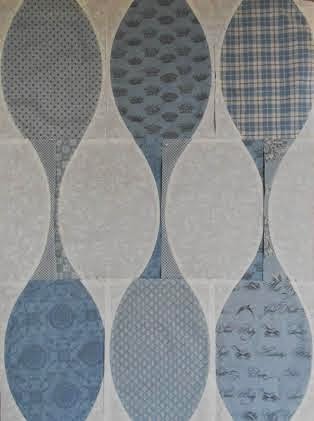 A sampling of what the completed blocks will look like.

Posted by crazyquilter at 6:24 PM 2 comments: 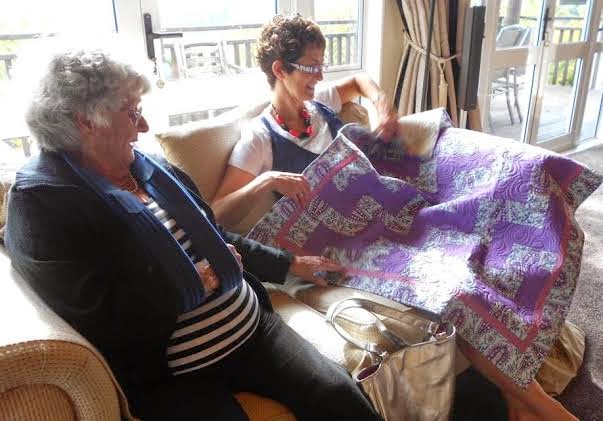 It was good to catch up with our Sweet Pea ladies once again today.

Maxie, on the left, had not been for a while so we all enjoyed meeting up with her again.

She came with a surprise for Rochelle, a lap quilt.  Rochelle was thrilled.  Nobody has ever given her a quilt before so it was rather special to see this happen.


We had another surprise in store for another member of the group,  Moira. 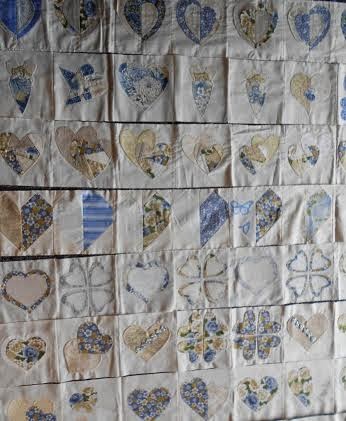 Our group has embarked on a row by row project for each other this year.

I received Moira's last month and the story she told was that her friend is having six month's chemotherapy and she wanted to make her a 'Hearts of Love' quilt for her.

The row by row project is not going to be finished until the end of the year so we decided to fast track her project and were able to present her with all of her rows today.

My photo is not too good but I feel sure Moira will be bringing back the completed quilt top and I may be able to get another opportunity to get a better result. 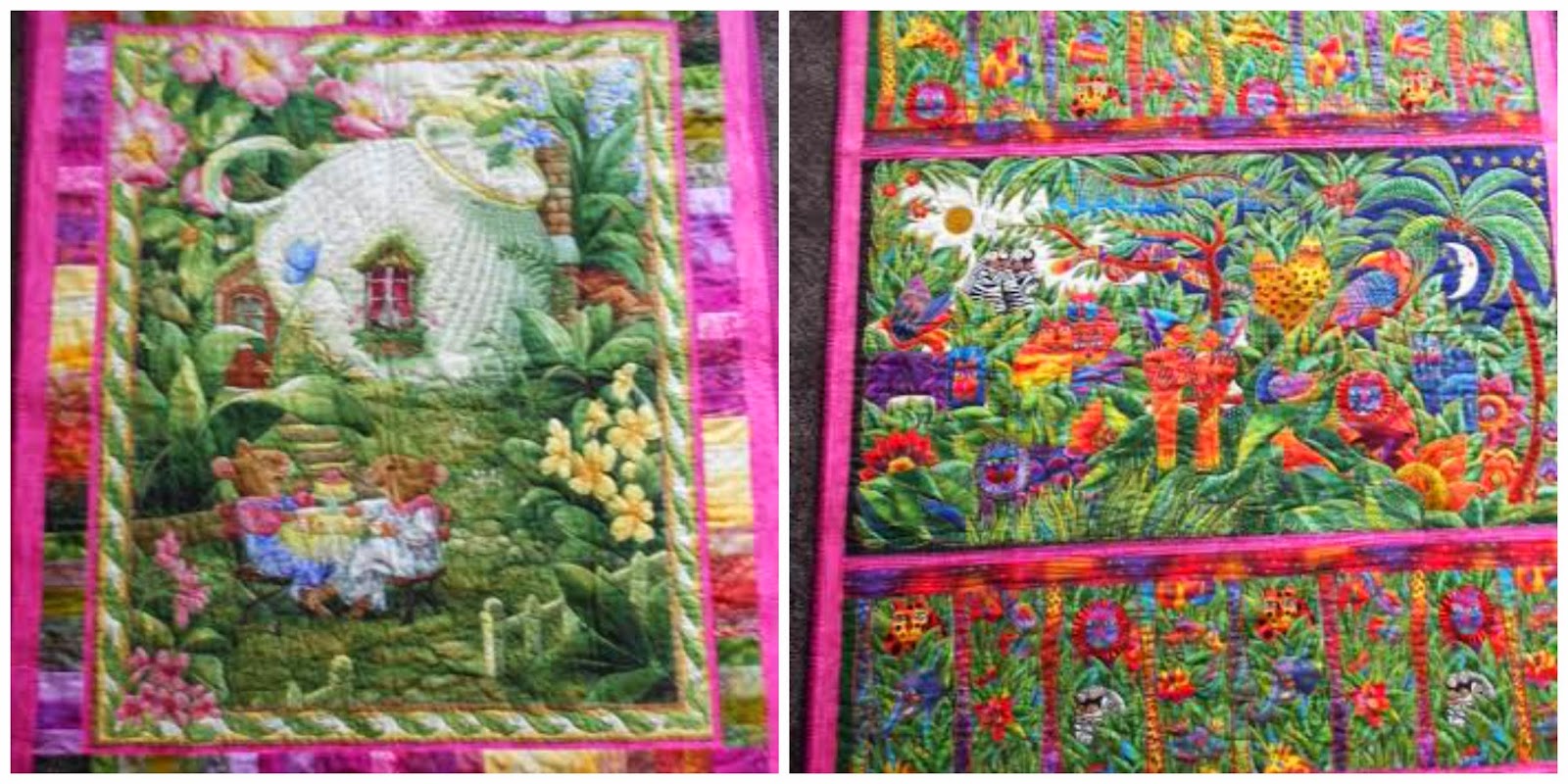 Margaret had some show and tell for us.  She recently completed these two quilts for her granddaughters.

They sleep in the same room and even though the quilt themes are different she has given them a common background of bright, bright pink.  The girls share the same bedroom and so these should look really good. 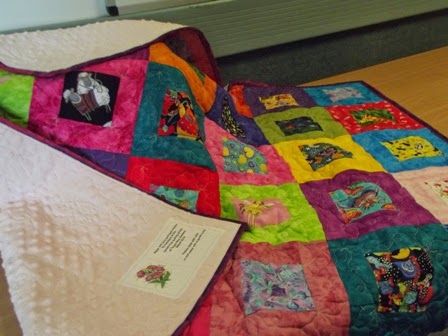 Our Happy Quilt arrived at its destination today and has been well received.

David Kemey, Public Relations Officer at Middlemore Hospital wrote to our group thanking us for the gift and has also posted about the quilt on their FaceBook page.

If you like to scroll down on their FaceBook page you can see more about Sakurako, including a photo of the little girl who will own this quilt.

Posted by crazyquilter at 6:13 PM 3 comments:

Happy Blocks quilt on its way 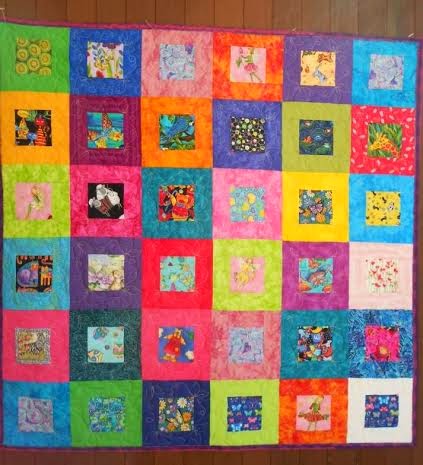 Our Happy Blocks quilt has been packaged and mailed to Middlemore Hospital today. 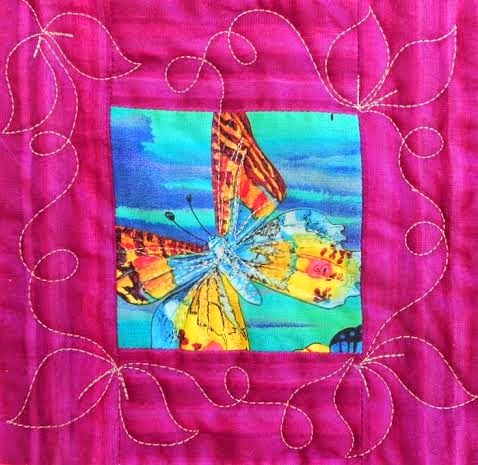 Linda chose a simple but effective leafy design to frame each block.

A little bit of stitching within each picture block helped to highlight them as well. 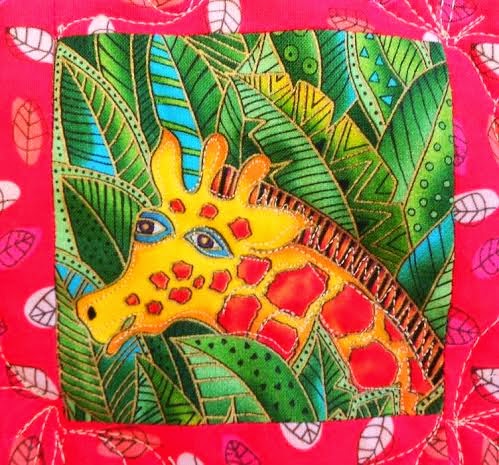 This giraffe was one of my blocks and I love the way Linda has highlighted the giraffe with her stitching. 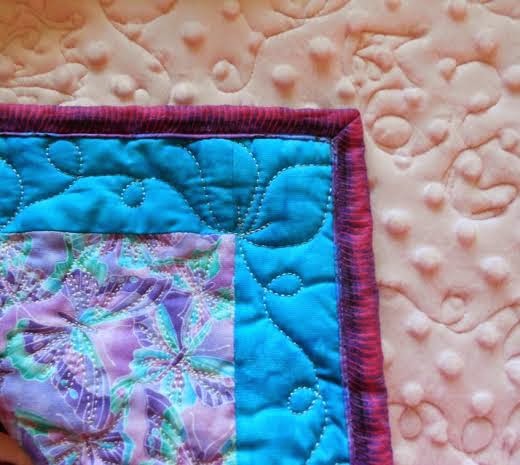 Some soft pink minky fabric made for a lovely soft backing.

Minky is hard to hand stitch binding on to so once again I resorted to magic binding and it worked like a dream for another great finish.
Posted by crazyquilter at 7:02 PM 3 comments: