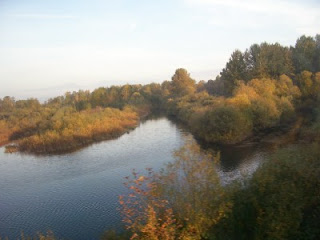 After a week in San Francisco with David and family I decided to go off on my own little adventure for a couple of days.

I took the Amtrack train from San Jose and travelled up the coast into Oregan, over the Cascade Mountains and on to Seattle, Washington.

The journey takes 24 hours and the under leg seat rest is a great help for the majority of people like myself who took a reserve seat and not a sleeper for the journey.

The countryside became prettier the further north we travelled. The Cascade Mountains were lovely, mile after mile after mile of autumn splendour. I had always said I would love to be in the America when the leaves were changing for autumn and I certainly had this dream fulfilled. 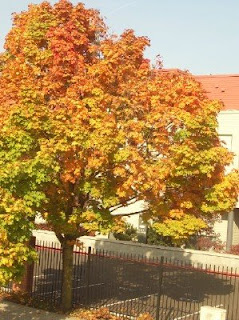 I had hoped to share images of the Cascade Mountains but my laptop was stolen on my return journey to New Zealand and I had uploaded my images and deleted them off my camera so they are gone for ever. Still, I have memories and they are all good ones.

Travelling by train over such a long period meant that meals were provided either in a community dining car or you could use the cafeteria. For most of my meals I chose to go to the dining car and it was a very good way of meeting people. Seating was limited and so you had to share with others in booths for four people.

Each meal time was totally different and so I got to meet an interesting cross section of people including Republicans who said they were voting for McCain but knew that Obama would win - how right they were.


The trip to Seattle was extended by a further 2 hours to 26 hours all up as we had to stop for rail works just near the Oregan border. This meant our train did not get into Seattle until about 10.30pm. I found a cab as soon as I could to take me to my pre booked hotel, made the most of sleep in a very comfortable bed, rose at 6.30am, showered and had a lovely cooked breakfast, before I headed back to the station for the return journey at 9.45am.

The forward journey was such that we arrived in Washington State after dark and so it was lovely, for the return journey to able to soak all of this in. Some very, very nice coastal scenery. Puget Sound would be worth a return visit, if only. It was just a glimpse in what was a very long train journey but enough to make me think that this part of the world could offer a lot more if I get the chance to go back.
Posted by crazyquilter at 3:36 PM