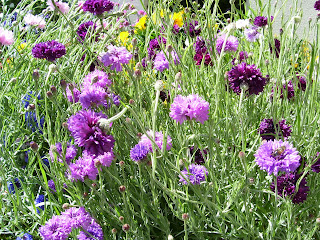 Last year was the first time I planted cornflowers.

I was probably influenced by my sister who had embarked on creating her own wildflower garden and cornflowers were an integral part of the whole scene.

I had not given much thought to this plant becoming part of my garden but I decided, because they are some of the taller annuals that I would use them as a backdrop to other plants and when they did flower I was pleasantly surprised.

Not only do they provide a good backdrop they flower prolifically over a long period and so I have come to believe they are really good value in the garden.

The other thing I hadn't appreciated about them was the lovely range of colours, soft pink, bright pink, lavender, deep purple and last but not least the true cornflower blue.

I try to keep up with removing the dead heads and am amazed at the number of buds that continue to appear.

Being cornflowers they volunteered to come back in the same spot as they had been last year, so this year I now have them in two different parts of the garden.

The new plants for this year are near the front door. They have taken very well and the flowers are in abundance.

If we were going to continue to live here maybe cornflowers would eventually take over the whole garden but with plans to move on I guess we will never know.

If you look really closely you can see a bee on the cornflower in the bottom right hand corner.
Posted by crazyquilter at 9:22 PM

Email ThisBlogThis!Share to TwitterShare to FacebookShare to Pinterest
Labels: cornflowers