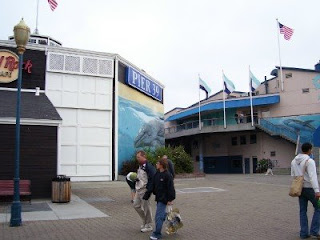 Today we decided to go to down town San Francisco.

It was decided that we would try to see Pier 39, Fisherman's Wharf, the Golden Gate bridge and go for a ride on one of the cable cars.

We were going with an open mind and if we achieved at least some of them I was going to be more than happy.

The weather has been quite warm since I have been here but Lisa checked out the weather conditions and said it could be a bit cool down town so I was thankful that I wore a jacket for extra warmth.

Going into town we saw lots and lots and lots of homes on the hills. Some of them were terrace homes, much like you would see in parts of Sydney but lots of them had flat roofs and looked like boxes in a row. Put me very much in mind of the words of the song - little boxes on this hillside and they're all made out of ticky tacky and they all look just the same.

It was quite a surprise to me as I had always admired the houses in the States, but this is Texas and towards the eastern seaboard where so many of the houses look rather grand with their deep eaves and lawn surrounds.

I guess the heritage of these houses in San Francisco go back to their early settlement days and so give the area its own characteristics.

The trip home along the Pacific Highway surprised me when at times we came down to one lane traffic - most unusual along main thoroughfares here.

At first the traffic in the opposite direction seemed to be delayed but then the same thing happened to us. It was Pumpkin Festival day here. Market gardeners had pumpkins on display by the acre and apparently today was the big day for people to go out and select their pumpkins for halloween.

Pumpkins with bright orange skins were the pumpkin of choice for halloween and they made quite a dramatic display spread out on the fields.

We saw the remains of the pumpkins at the end of the day and there were so many, it is hard to imagine how many there would have been at the beginning of the day.

Apart from pumpkins aplenty it was lovely to travel along this part of the highway with sometimes quite dramatic views of the Pacific Ocean. Again, I was reminded of parts of Sydney, especially the trip down the coast to Wollongong where similar sweeping views of the Pacific Ocean from a totally different part of the world can be observed.
Posted by crazyquilter at 5:58 PM