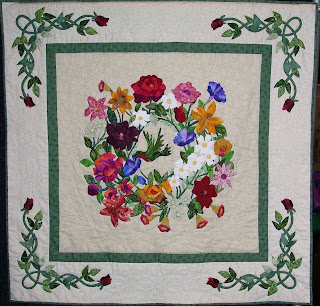 When I planned my trip to San Francisco I had no idea whether there would be any quilt shows or activities in which I might be able to participate.

Johanna let me know about the Pacific International Quilt Festival and it just happens to be in the same part of San Francisco where David and Lisa live and on during the first few days of my arrival.

On Saturday afternoon David and Lisa dropped me off to spend a few hours enjoying the wonders of the world of quilting.

After wandering the first few aisles of merchants they seemed to run out which I thought rather strange as this was supposed to be HUGE. When I backtracked and went down a few aisle of quilts and then more merchants, I discovered they had alternatated between quilts and merchants, which meant you did not get too much of one of the other. Very good idea.

Lots of lovely merchants and so I came home with heavier bags and lighter pocket book but all in a good cause, I feel.

The quilt image in this posting was a mystery applique quilt. It started with an image of the border only in black and white which gave participants the opportunity to choose their own colours for the whole quilt and then the rest of the quilt was revealed after borders were done. I had never seen applique quilts used in the mystery concept before.

My three/four hours at the quilt festival were well worth while and I could go back for more of the same today but we must press on and do some of the sightseeing that San Francisco will provide for us today.
Posted by crazyquilter at 5:45 AM