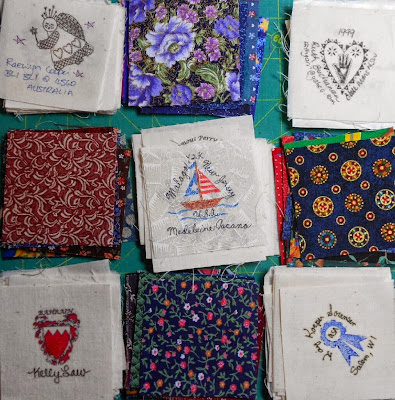 The weather was not good enough today to be taking photos of my Nine Plus Four Version 2 so it was back to the Y2K fabrics to see what I could do with them.

When I participated in this swap each of us involved sent signature blocks and I have quite a collection of them especially now that they are combined with the ones Linda received.

Originally I never thought I would use them but after 14 years I now find them appealing and so have decided to incorporate them into a scrappy nine patch quilt.

Some blocks are just signatures along with town and country details. 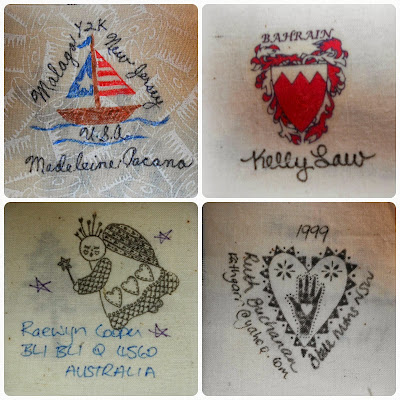 Others are quite artistic as reflected in these images.

The majority of the blocks came from the United States but other countries were represented as well - Bahrain, Australia, New Zealand, Germany and England.

I think this will be a quilt we will enjoy having around the house once it is completed.


Posted by crazyquilter at 6:51 PM

Fabulous squares - this is going to be a fun quilt.

I love Siggy blocks. There are some really artistic ones there. Also I love that little floral print in the first picture bottom middle.
have fun
xo jan@sewandsowfarm

This will be a truly special quilt indeed!!