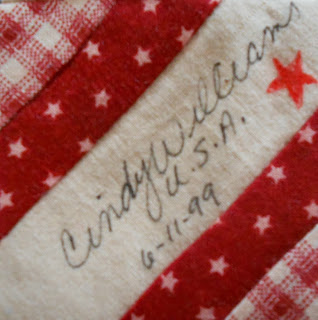 It has been an interesting exercise looking at all of the different names and places where they have come from.

I said that blocks came from the United States as well as Bahrain, Australia, New Zealand, Germany and England.  I should have added Canada and Denmark as well.

All of the signature blocks were on calico or quilters muslin except for the one to the left which was foundation pieced in reds and creams and I have placed it in the centre of one of the nine patch blocks. 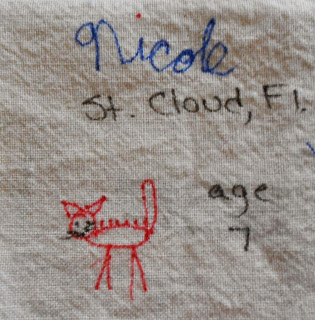 This block was created by a 7 year old.  She must be about 21 years of age now.  I wonder if she remembers participating. 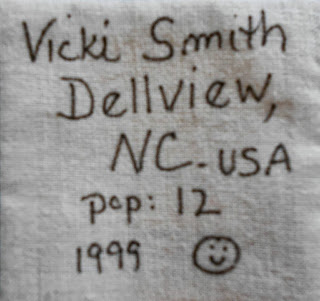 This lady, Vicki, had a claim to fame.  She lived in Dellview, North Carolina.

The township had a population of 12 people.


The other thing I forgot about when combining our signature blocks was that their might be duplicates.

With Linda and I being involved in the same swap we both had signature blocks from the same people so we have duplicates of some but in the interests of it being a scrappy quilt I have decided to incorporate them into the one quilt.

After all, I would not want to have to think of
another project to use them in, would I?


Posted by crazyquilter at 7:27 PM