The signs are out but is anyone at home. 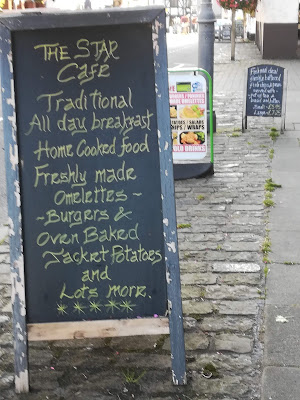 We stayed in a delightful B and B over a typical English style pub whilst in Eccleshall.

On our first morning there was milk provided so making our first coffee of the day was not a problem.

The next day was Sunday and we had been told that nobody stirs in Eccleshall before 10am on a Sunday.

After 7am I went to make morning coffee but the housekeeping had forgotten to replenish the milk for us.

I went downstairs but there was nobody available.  I decided on a walk to the local supermarket which was not far but true to type it was not opening on a Sunday until 10am.

I walked up the Main Street, sill hoping that someone may have opened their doors for a bit of business activity but it was not to be.

What was interesting to note was that the business owners do not appear to be bothered about leaving their signs and chairs out overnight regardless.

We had been told that the police station has closed down in Eccleshall.  Crime rate must be at all time low for neither chairs or signs to meet with damage or theft.

In the end I returned to our room and we had black coffee for starters.  Eventually the local coffee shop opened, at 10am of course, and we were able to have coffee with milk. 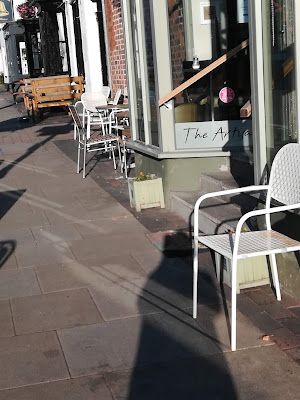 Posted by crazyquilter at 7:14 PM

I'ive stayed in small towns where everything closes at 5PM. It definitely requires pre-planning for meals.