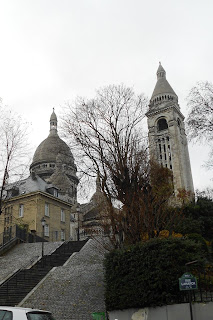 When you go up in the Eiffel Tower and look out over the city, most of it is built on flat lands but off in the distance is the hill of the suburb of Montmarte and at the top of the hill you can see the Basilica of the Sacré Cœur which was just a short distance from our apartment.

We walked by it a few times but did not go and look inside - for me the stairs were rather daunting and there were many more than this picture reveals - but it really did look like a rather grand building.

Our taxi experience improved and Ricky found out that he could book a cab for us on Sunday morning to take us direct to the railway station.

It arrived in good time to take us on our way and as the driver turned to take us down the hill he took us to the other side of the Basilica and there was another world that was so near but so far.

There was a fantastic lookout with amazing sites back over Paris as well as a market place and shops that had totally escaped us.

If we ever have the chance to return this would be a definite inclusion in our places to explore.
Posted by crazyquilter at 6:22 PM

Email ThisBlogThis!Share to TwitterShare to FacebookShare to Pinterest
Labels: Paris