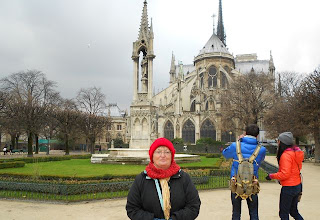 When Ricky and I came through to the other side of the tunnel, on our way to Paris, it became clear that it had been snowing in France.

The rolling countryside was covered with snow and for those of us not so accustomed to such sights it was very pretty.

My other observation was that throughout the countryside there were towns and villages and as a centrepiece of most of them were these grand churches with their spires rising high into the sky. It was almost as if the surrounding dwellings were  clustered there with the church as their centrality to life.

When we were at the Eiffel Tower the guide was talking to us about the Notre Dame Cathedral and telling us that the Cathedral was the located in the centre of Paris and it was from there all kilometres were measured.

Because of the size of the city it was hard to picture that the Cathedral was indeed the centrepiece but it did bring to mind my observations as we made our way into Paris.

Regardless of any religious persuasion this 850 year old Cathedral is worth taking a look at inside and out.  Ricky was very taken with the lovely creaminess of the limestone used in the buildings in Paris and this place was no exception, beautiful inside and out.

Queues can be a problem in Paris but we joined the one here and it was not long before we were inside.  No charge to get in but if you wanted to light at tealight candle it cost E2.00 or a bigger one E5.00 and from the number of candles lots of people obviously liked to participate in this.

You can only stand in awe at the magnificence of the architecture of this building.

Posted by crazyquilter at 4:01 AM

Email ThisBlogThis!Share to TwitterShare to FacebookShare to Pinterest
Labels: Paris

I marvel at not only the beauty of these buildings but also the engineering, the planning, and the labor that it took to make them to withstand the ages. Amazing!

What's up, this weekend is pleasant in support of me, as this time i am reading this impressive informative post here at my house.
My website how to make money From home no scams

I am curious to find out what blog platform you're utilizing? I'm
experiencing some minor security problems with my latest website and I
would like to find something more safe. Do you have any suggestions?
my webpage :: top legitimate work from home jobs

Hi! This is my 1st comment here so I just wanted to give a quick shout out and say I truly enjoy reading your
articles. Can you suggest any other blogs/websites/forums that cover the same
subjects? Thanks for your time!
Feel free to visit my web page :: online jobs work from home

Hi, i think that i saw you visited my web site so i came to “return the favor”.

I am trying to find things to improve my site!I suppose its ok to use some of
your ideas!!
My site : best online money making sites

hello!,I like your writing very a lot! percentage we keep up a correspondence extra
approximately your post on AOL? I need an expert on this area to unravel my problem.
Maybe that is you! Taking a look ahead to see you.
Feel free to surf my blog ; affiliate marketing