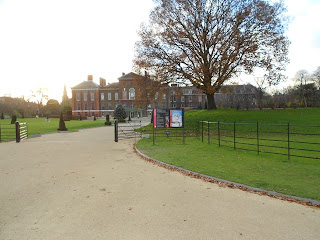 What would a trip to London be without a visit to at least one of the Royal landmarks so it was off to Kensington Palace for us.

I had seen advertised an exhibition of the life of Queen Victoria and I thought this could be of interest.

I did find it very interesting and in particular loved the garments of the era which were beautifully displayed.

In addition to the exhibition you could also visit the Queen's and King's apartments.

The coronation garments of King George III  in the King's Apartments were particularly magnificent. 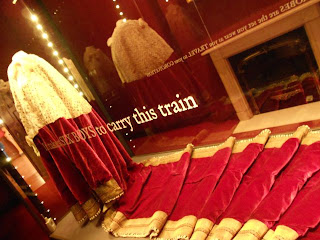 As interested as I was in everything that was on show I struggled with the poor lighting.

There was quite a lot of information on hand to read but I did not find it easy.

In the end I spoke to one of the guides about it.

She went to great lengths to explain that they had to take care to have minimal lighting to protect the textiles in the exhibition because of their great age.  However, she did add at the end that a lot of the palaces were closed for the winter months and that they were only closed for three days of the year.  This meant that other castles had more in their budget for lighting but Kensington Palace did not have enough so this was part of the reason for dim lighting.

You can have a great exhibition but never mind if the people can't see it properly, we just don't have money for the lighting. 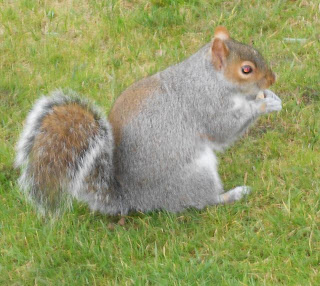 So to lighter matters.

Squirrels scuttling across the grounds of Kensington Palace.  This one was quite familiar with people and was making the rounds to see if someone would provide his meal for the day.

Aaron had a lot of fun feeding this one some nuts.

We moved on from here and caught a bus to Trafalgar Square, a favourite spot for me and so to the National Gallery to have a look at just a little of the magnificent art collection they have.  This is the third time I have been there and it never ceases to fascinate me.

Aaron and Marcele had never been there before but felt it was somewhere to which they would like to return .

We met up with Ricky for an evening meal together and then on to the theatre to see  One Man Two Guvnors. What a fun show that was.  The others had all seen it before but felt it worth a second viewing.  I would happily go back to see it again too.  It was very cleverly done.

Posted by crazyquilter at 10:46 PM

You are definitely persuading me that I need to travel to England. My paternal grandmother was born in Manchester, England and immigrated to America with her brother. I would love to roam around the countryside and visit castles and museums. I need to plan the trip and book my ticket.